This exhibition is the first large-scale presentation of Indrek Galetin’s work in Tallinn since 2009. It showcases a selection of striking imagery from his oeuvre, including his best-known portraiture, and two accompanying fashion films, all drawn from his enduring and vibrant career in London. This show presents the breadth of his achievements and encompasses work that has been featured in numerous international media outlets, magazine covers, feature articles and advertising campaigns.

With relentless perfectionism, signature compositions, electric colours and surreal aesthetics, Galetin has created a body of work that celebrates diversity within gender. His constant questioning of banal beauty stereotypes through myriad subjects redefines standards and breaks down the outmoded conventions by which society views the human form. His unique conception of these generic archetypes, and his criticism of them, allows him to reconstruct our own interpretations of the complexities of the human body.

Conceived as a journey through Galetin’s imagination, ‘Undefined Perfection’ brings together the photographer’s unforgettable portraits and dramatic new work. Munroe Bergdorf, Seann Miley Moore, Alisha White and Gina Harrison are some of the personalities in entertainment, fashion and music whose portraits are featured in the show.

Born in Tartu, Estonia in 1987, Galetin began working as a freelance photographer for Estonian publications in 2005 and served as the official photographer at the Eurovision Song Contest from 2007-2010. The following year he moved to London, where he went on to study photography at the London South Bank University, earning his BA in 2017. Since completing his degree his work has been regularly seen in an array of international publications. In 2018 he shot a cover story for Gay Times magazine, the most influential and well-respected queer publication in the world, featuring transgender model and social activist Munroe Bergdorf.

In his own country Galetin is renowned for his controversial pieces, the highlight being his charity solo exhibition ‘Amour – Vahet pole’: launched in 2008, it was inspired by the idea of love and relationships between people regardless of whether they are straight, gay or bisexual. The exhibition was well received by the Estonian press, and as a result all of the photos were sold at auction, raising a record-breaking amount that was donated to the Estonian AIDS Prevention Centre in support of their vital work. 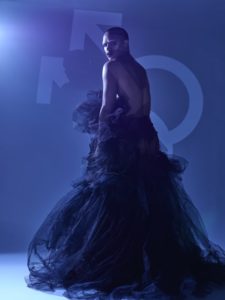