In addition to historical heritage, the Portrait Year of the Museum of Photography focuses on the possibilities of modern portrait photography in the expression of various artists. Exhibition Dialogues by Alena Shminke, a photographer who moved to Estonia from Russia, and Mike Rossi, a photographer from the USA.

Inspired by music and phototherapy, Dialogues is like a visual art jam session, from which a mutually reflective portrait of artists and their states emerges. Shminke’s idea was to study photography outside of individuality: how individuals interpret photographs when engaging in photographic dialogue on the same principle as musicians do when improvising together. Finding Mike Rossi, a co-artist with a similar idea, started a duel of images that offered surprises, which became intriguing in its intimacy and multilayeredness. By sending photographic images to each other from thousands of miles away, a unique composite portrait of each was unveiled, which is suitable to spice up the theme year of the Museum of Photography from a perspective different from a classic portrait photo.

Shminke: “Now that I look at the pictures, I realize that there are no pictures of me or Mike’ here. It’s a whole and the photos don’t live on their own but they talk to each other. This is a truly extraordinary experience for me. This project was done by people with different views, different techniques, from different countries, different cultures, ages and genders.”

Ross: “Now that the dialogue is over, I realize that people are the same everywhere. They have the same hopes and fears and they try to express themselves in one way or another. ”

The Dialogues initiated by Shminke was also one of the impetuses for the birth of the Isolation Dialogues, a major project of the Museum of Photography during the state of emergency.

Alena Shminke is a psychologist and photographer from Russia who lives and works in Estonia. As a photographer, she focuses on still life, self-portraits and architecture. Alena graduated from Moscow State University of Medicine and Dentistry (2013) and Tallinn Polytechnic School (2019). Participated in student photography exhibitions at Tallinn Polytechnic School (2017, 2019) and Museum of Photography (2018). Shminke regards photography as a process of memory, a way of communication and a form of psychotherapy.

As a 5-year-old child, Mike Ross started taking pictures with a camera given to him by his father. As a teenager he photographed with a compact camera. After that, he had a 25-year break in photography because he got caught up in alcoholism. After rehabilitation, he started taking photos again, already with a digital camera, which gave him joy. He completed design courses at the college, studied photo editing, and his interest in photography grew. Photography became a new obsession for Rossi, which had a healing effect for him. This shows the possibility of photography as a form of therapy. “It helps me focus on other things than a bottle of alcohol. I will answer this to anyone who asks why I am taking a picture of a horse’s nose or something like that.” 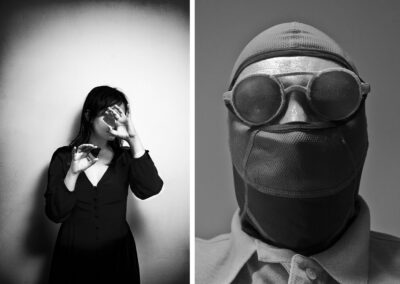